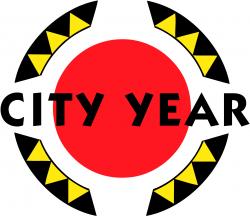 City Year helps students and schools succeed. Fueled by national service, City Year partners with public schools in high-need communities to prepare students with the skills and mindsets they need to thrive in school and in life. Diverse teams of City Year AmeriCorps members serve full-time as tutors, mentors, and role models, providing research-based student, classroom, and whole school supports to help students stay in school and on track to graduate from high school, ready for college and career success. A 2015 study shows that schools that partnered with City Year were up to two to three times more likely to improve on mathematics and English language arts assessments.

With our partners, City Year is contributing to a bold vision of what public schools can and should be for all children: places of learning, exploration, growth and risk-taking.

A proud member of the AmeriCorps national service network, City Year is supported by the Corporation for National and Community Service, local school districts and private philanthropy from corporations, foundations and individuals. City Year has earned Charity Navigator’s highest rating since 2003, certifying our commitment to accountability, transparency, and responsible fiscal management. Less than one percent of rated organizations have received this distinction for more than 15 consecutive years, placing City Year among the most trustworthy nonprofits in America. Learn more at www.cityyear.org, City Year’s Facebook page, on Twitter, and LinkedIn.

Email me jobs from City Year